September is an odd month for beekeepers. The weather is still warm, and it feels like we should be doing something - but there is not much for us to do. It is too late to raise queens or make splits. We are not adding supers because the nectar flow is over. If we have harvested honey, we are starting to condense the hives for the winter. But, we cannot condense them too much too early. As usual, it can be difficult to strike just the right balance.

We want to condense the hives and get them to winter configuration, but if we do it too soon, we can actually force fall swarms. And then everybody loses; The bees, the Beekeeper, and all of those who benefit from hive products. Because a fall swarm as no chance of surviving. 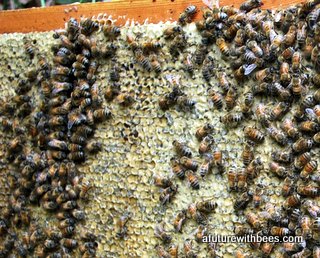 The queen has already reduced her rate of egg laying and the hive will not seem as populous as it was two months ago. There will be less drones and fewer frames of brood. The lower box will contain a lot of pollen. Hopefully the upper box contains a lot of honey. While the colony is still very active, they are not bringing in as much nectar or honey as in the past months. As a matter of fact, most hives will neither gain or lose significant weight this month.
The colonies' activity level and configuration changes from month-to-month. This is important to remember. I often get calls from beekeepers who are concerned because the hive does not look like it did a month ago or, like the picture they have in their head. That picture is often static and they expect the hive to look the same all the time. Sort of like expecting your child to look the same all the time - it just doesn't happen that way. A beehive is constantly changing from season to sea-son and month to month. It takes practice to adopt a mentality of thinking what a beehive should look like according to this season's weather and the current time of year. I have worked cultivate a practice of thinking about what the hive should look like before I open it up.

Lessons I Have Learned: