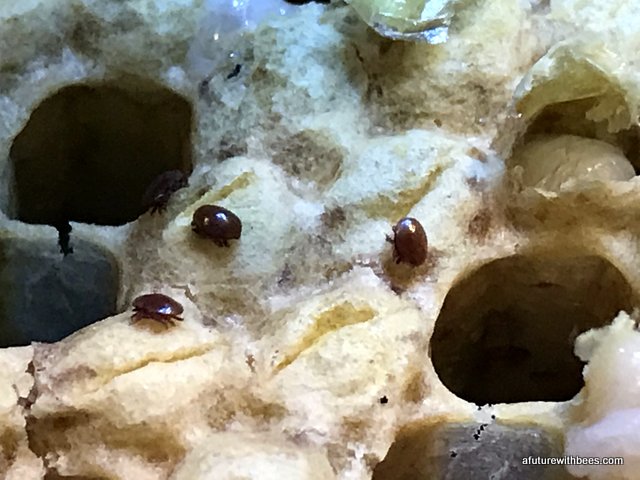 Following one of my favorite beekeeping experts, Randy Oliver of Scientific Beekeeping we created a video demonstrating our experience one day checking drone brood.

"Varroa reproduces rather poorly in worker brood, but is nearly three times more successful in drone brood, due to its longer postcapping period. It’s not surprising then, that female mites prefer drone brood by a factor of roughly 10 to 1."

"The beekeeper practicing varroa IPM can minimize varroa reproduction by managing the amount of drone comb in his colonies. This is especially important since hygienic bees remove only infested worker pupae, not drone pupae. I’ve already mentioned the importance of culling old combs with drone cells. Wilkinson and Smith (2000, 2001) modeled the effects of drone brood management. They state: “At 5% drone brood, as many mites are emerging from 50-60 drone cells as from 1000 worker cells. This certainly emphasizes the importance of drone brood in mite population growth, and the need for beekeepers to prevent large quantities of drone brood being reared unnecessarily and being left to emerge in the hive.” They suggest “regular and ruthless ‘culling’ of the old combs and the badly built combs.” Their model predicted that reducing drone brood from 4% to 3.2% would reduce the mite population growth rate by 25%! They suggest that drone brood is more important to mite growth at low mite levels, since drone brood capacity for mites reaches its limit before that of worker brood.

Clearly, the beekeeper should cull frames containing drone comb. However, we can go even a step further, and use drone comb to “trap” mites, and then remove those mites from the colony. This process is called “drone comb trapping,” and is widely used with great success in other parts of the world. The concept is simple: insert a frame of drone comb into a colony at the edge of the brood nest, allow the queen to fill it with drone eggs, wait while the mites infest the cells, then remove the frame before the mites emerge. Theoretically (Wilkinson & Smith 2002), trapping with one deep drone frame once a month for four months will delay the mite population from reaching a damaging level for 2-4 months; two frames monthly will delay it for a year." Randy Oliver - IPM 5.5 Fighting Varroa 5.5: Biotechnical Tactics II