I like to place bee yards close to rivers and streams because the bees have the water they need to raise brood and cool the hives and these aquatic corridors also offer a wealth of resources. They are a swath of ground full of wildflowers and trees all season long. It works well for me......most of the time.

Friday, May 29th, it rained a little more than 3 inches in a very short time. It came down hard. I live across a dry bridge where the water will come over the bridge when we get more than an inch rain in a short time. It happens about 3-4 times a year and generally subsides in half a day or so. 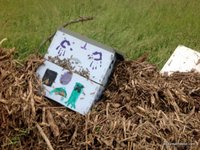 Well, this time the water not only came over the bridge, but overflowed the banks and swept across the fields, fences, and trees. I estimate it hit the 30 year flood level. I've never seen it get close to that mark in 8 years. So, it was 3 days before I could get back across, and even then it was dangerously high.
Well, as I came up into the field I wondered why I wasn't seeing my beehives.....then it struck me....they were gone! Ten hives were swept away in a flash flood. Swept away in a swirling watery maelstrom of mud, trees, and debris. I can't imagine what it is like to be buffeted by all that! There were stones the size of my head in the field afterwards!

The only reason I was able to recover any of the hives is because they fetched up against the barb wire fence at the end of the field (what was left of the fence).

As you can see in these pictures, there were very large limbs and tons of debris, twigs, leaves, corn stubble, in that swirling wave of water. Not only were the hives flooded, they were tumbled and beaten by all that debris!

Remarkably, when I found them 2 days later, there were still 6 hives with bees in them! There were thou-sands of bees crawling around covered in mud. Mud so thick they couldn't fly or recover. Several hives had turned over and were drowned. Several others apparently floated upright for most of the way and only tipped over near the end. The hives with solid bottom boards tumbled the most. My screened bottom board design apparently let the water come up into the hives and drain out just as quickly.

There were also 2 long hives in this yard. They floated down the current like barges and are both still alive today. One was completely flooded but recovered. The other has a water mark on all the frames about 80% of the way up. All the bees were crowded into the top of this hive when I found it.

Of 10 hives, I could find 9 of them in the fence. In the end, 4 of them are still alive and queen right and are recovering nicely. The day I found them, there was a mass of bees on a fence post near the original location looking for where the hives went. It looked like a swarm. In the picture gallery and videos below look at the bees still clinging to their hive!

Inspection after the flood:

Look at the water in the frames: