The three distinct kinds of honeybees in a colony are queen, worker, and drone.

The queen is the longest bee in the hive but has the shortest wings. She is the mother of all the other bees. Her most important job is to lay eggs.

Her productivity depends on the amount of food the workers bring in and the amount of brood space in the colony. She can lay more than 1,500 eggs a day. A good queen does not waste any space. She lays a solid pattern of brood, meaning one egg in every cell. Few eggs scattered among many empty cells or several eggs per cell are signs of problems. The queen might be missing or old, or parasites or disease might have weakened the colony. It can take some detective work to solve the problem.

In the picture below the: Queen - long and thin, Drone - thick and fat & Workers - average (on both sides of the drone) Mouse over for larger view 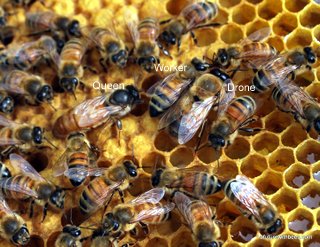 Worker bees usually rear new queens for one of three reasons: 1) the former queen left with a swarm; 2) the queen is laying increasingly fewer eggs; 3) the colony is overcrowded and has no place to expand. A colony that loses its queen suddenly is very upset but soon starts to rear a new one. Worker eggs or larvae less than three days old are raised in quickly built queen cells which hang vertically and are about the size and shape of a peanut shell. A fertilized egg hatches in about three days. The larva eats a special food called royal jelly. After growing rapidly for about six days, the larva pupates in the cell. The queen emerges about eight days later.

A major function of a queen is producing pheromones that serve as a social “glue” unifying and helping to give individual identity to a bee colony. One major pheromone—termed queen substance—is produced by her mandibular glands, but others are also important. The qualities of the colony depend largely on the egg-laying and chemical production capabilities of the queen. Her genetic makeup—along with that of the drones she has mated with—contributes significantly to the quality, size, and temperament of the colony.

A newly emerged queen stings the remaining queen cells in the colony and fights any other queens she finds. The former queen is killed if she is still in the hive. Usually she has already left with other bees in the colony. Six to eight days after emergence, the queen takes nuptial flights and mates high in the air with the male (drone). Then she settles down and lays eggs. She will leave the hive only with a swarm. (Swarming is the natural way by which colonies are established at new locations.)

Queens live about five years with some living as long as nine, but egg-laying drops off significantly after two years. Many beekeepers keep a queen longer than that; others replace the queen every year to keep the colony strong. Colonies with older queens are more likely to swarm. Swarming usually occurs just before the main nectar flow. Hives that swarm have drastically reduced honey production.

Workers are smaller than the queen and drones, but there are lots of them. There might be only a few hundred during winter and early spring, but there are usually many thousands during summer when pollen and nectar are plentiful. A strong colony at full strength can have close to 100,000 workers. These bees keep the colony going.

Life begins as a fertilized egg. Laid singly in cells, each egg is attached to the bottom of the cell and stands upright. Eggs hatch in about three days. Each larva is fed royal jelly for three days then pollen and honey for three more. Pollen and honey are not as rich as royal jelly, so the larva becomes a worker instead of a queen. The white grub-like larva molts (sheds its outer covering) five times during the six days. Just before maturity, house bees cap the cell. The larva then spins a cocoon and becomes a pupa. The adult emerges 12 days later. It takes about three weeks to mature from the egg to an adult bee ready to go to work.

Workers' jobs change with their ages. Young bees, called house bees, do the hive chores. They produce wax and shape it into combs (structures of cells containing honey and brood) and use propolis (a gummy substance gathered from plants) to seal cracks or cover rough edges in the hive. House bees also fan their wings to ventilate the hive in summer, controlling temperature and humidity, and they provide heat in winter. Some guard the hive to keep out raiders. Many produce honey and royal jelly. A lot of time is spent feeding brood and cleaning and repairing cells. House bees also feed the queen, the drones, and each other. Older workers, or field bees, gather nectar, pollen, and water. The average adult worker lives less than a month during the busy season; overwintering bees live several months.

When a colony becomes queenless, the ovaries of several workers develop and workers begin to lay unfertilized eggs. Development of the workers’ ovaries is believed to be inhibited by the presence of brood and the queen and her chemicals. The presence of laying workers in a colony usually means the colony has been queenless for one or more weeks. However, laying workers also may be found in normal “queenright” colonies during the swarming season and when the colony is headed by a poor queen. Colonies with laying workers are recognized easily: there may be anywhere from five to fifteen eggs per cell and small-bodied drones are reared in worker-sized cells. In addition, laying workers scatter their eggs more randomly over the brood combs, and eggs can be found on the sides of the cell instead of at the base, where they are placed by a queen. Some of these eggs do not hatch, and many of the drone larvae that do hatch do not survive to maturity in the smaller cells.

Drones are larger than workers but not as long as queens. A drone has large eyes that touch each other at the top of the head. Drones do not have stingers, pollen baskets on their legs, or glands for producing wax, and their mouthparts are too short to gather nectar. Moreover, they do not even do jobs they could like ventilating the hive. Their only function is to fertilize the queen, and they die in the process. Drones are banished from the hive before winter begins. 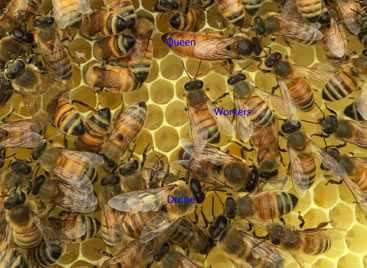 While drones normally rely on workers for food, they can feed themselves within the hive after they are 4 days old. Since drones eat three times as much food as workers, an excessive number of drones may place an added stress on the colony’s food supply. Drones stay in the hive until they are about 8 days old, after which they begin to take orientation flights. Flight from the hive normally occurs between noon and 4:00 p.m. Drones have never been observed taking food from flowers.