March is one of the hardest months for bees. More beehives starve in March than they do in January and February. Why? Because they are not doing much in Jan. and Feb. so they are not eating much. Just trying to stay warm. How-ever, in late February or early March, they start rearing brood to prepare for the spring harvest of nectar and pollen.

These girls have to be prepared with a large enough population in April to collect all of the food they will need. They need to collect enough food in April, May and June, to hold them for the next 9 months. How many of us could do that? 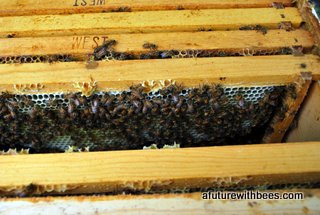 It is a short time to do a lot of work. So, they need to be proactive and prepare a large population to survive. So, they start rearing brood even though it is still very cold at night and not really very warm some days. Rearing brood takes a lot of resources. Their honey and pollen consumption increases dramatically (I’ve got the figure 700% increase in my mind but I can’t find the reference for this number). Even if it’s not 700%, it is several times more food consumption than they were consuming in the early months of winter. A hive that seems fairly heavy in late February can suddenly start eating everything in sight and starve in March if the weather has not warmed enough to start producing adequate pollen in the trees.

I try to avoid supplemental feeding. It is counter-productive to breeding bees who survive on their own. However, losing a strong hive in early spring because I wouldn’t add a sugar block or pollen patty doesn’t help my program either. So, I mark those hives that need feeding and cut them from the breeding program by using them to raise queen cells from the genetic lines that didn’t need feeding. I reallocate the resource instead of losing it. So keep an eye on the girls and help them if they need it – and log it in your journal so decisions can be made later with good data.

My journals show that most hives are booming by the end of March in most years. They are bringing in pollen and building combs in the 2nd and 3rd weeks. Many hives have started rearing queens and prepping to swarm by the first week of April. Dandelions, soft maples,willows and other plants are blooming all through March.

Mistakes I’ve made in March:

Hopefully, we will be getting ready to deal with wonderful swarms, like this one by next month!

I hope that sharing my mistakes and experiences will help you understand why these choices are necessary and will help the bees.