April is one of the busiest months for the bees and thus, the beekeeper. The bees kick into overdrive and the populations explode. Some hives are already drawing new wax and increasing brood production. Some aren’t. They don’t all act the same way or work on the same time table.They are bringing in pollen and will soon start to ignore the pollen patty. Shrubs and flowers are blooming and the bees are bringing in tons of nectar.

The hives get crowded with all the extra bees, brood, pollen and nectar. It quickly gets to the point where there are very few empty cells. This is when the colony feels crowded and wants to swarm.

The beekeeper is hustling to get enough equipment on the hives and to channel the swarming impulse into splits and nucs. Nectar needs to be spread out over a large area of cells to be condensed into honey. We need to make sure there are plenty of supers on the hives. At this time of year (April, May, June) there can’t be too many boxes on a hive. They need more room than they can fill with honey. Outside of this time period, the beekeeper needs to manage space more carefully. I have made the mistake of not putting on enough boxes.

Many hives are ready to split by the first week of April in this area. If they get to the point where they are starting queen cells (not queen cups), and swarming, then it is about 2 weeks too late and splitting will be much less successful. I have waited too long to split and had to try to save what bees I could when the colony goes into swarm mode. Splitting is one of the best ways to channel the swarm impulse into something productive. There is no such thing as swarm prevention. They want to swarm (reproduce) just like every other animal. They will do it no matter what, the question is will you direct it? Splitting = controlled swarming. By splitting, we “swarm” the hive in a controlled way and the “swarm” has a much greater chance of survival. Splitting does not mean the we split the hive in half. It means we take off the surplus bees and brood that are causing the hive to feel crowded. I like to leave 4 frames of brood in the parent hive and move the rest to the split. If the queen is taken to the new split, she will continue to build up that colony. The parent hive is left with plenty of brood and all the field force. They are perfectly set up to raise another queen. No need to buy one - they will raise their own. That’s how hard it is to raise your own queens.

Many folks don’t want to split a hive because “I don’t want to hurt my honey production by weakening the hive”. The irony of this is by obstructing the natural urge to reproduce and swarm (split), the the colony is weakened. Splitting them helps them. A properly split hive will rebound and produce more honey than a hive that was constantly blocked and is fighting it. It’s like the phoenix rising from the ashes stronger than before. They NEED the natural cycle of swarming/splitting to stay strong.

Side note: this same principle applies to comb in my experience. They NEED to draw comb every year. When we try to keep them on all drawn comb “because it helps them”, we inadvertently hurt them because they can’t fulfill their natural mission. Give all hives some new foundation to draw from April to July. I have found my hives work much better when I work with them instead of fighting what they want to do. 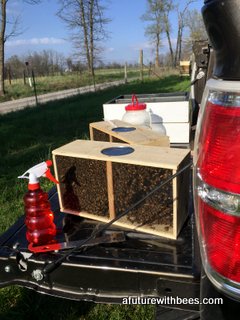 A lot of packages and nucs are being brought in this month. A mistake I often see; people treating packages/nucs like regular colonies. Don’t treat them like full grown colonies. Think of them like a baby - keep them wrapped tight and warm, and well fed. Don’t open the screen bottom until they are fully occupying at least 7 fully drawn frames, preferably 10. They can regulate heat well, so don’t worry it is too warm. They handle heat better than cold, and the nights are still cool. Keep the entrances reduced. They don’t need ventilation - most wild colonies have only very small en-trances. Most professional beekeepers use solid bottom boards. Ventilation sounds good to us mammals, but insects like bees don’t like or need it. Keep the feed on them until they quit taking it, or when you start stacking on honey supers. These decisions are driven by the bee’s behavior and hive conditions - not by the calendar, or the beekeeper’s needs.
And, by the way, since they are a “baby”, not a full blown colony, swarming is not at issue.