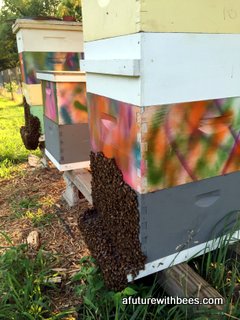 July is normally a hot, dry month here in the Ozarks. The population in most hives has reached its peak and will slowly start to decline by the end of July because the main nectar flow is over. July and August see very little nectar coming into the hives. From what I’ve experienced, there is just enough nectar for them to maintain their reserves but not enough to gain significantly. (Although keeping a hive on a scale shows some very interesting ups and downs).

Swarming season is over unless hives are left with too little space and are severely congested. As things start to slow down, my hive inspections are reduced. If there is adequate room on the hive, I only check them about every 3 weeks in July. By August, I am only checking them about once a month.