April and May are the two most important months in the yearly cycle of a beehive. Most of what they need to survive for the rest of the year is done in April, May and June. This is when they harvest most of the honey, draw most of the comb, and reproduce. The population reaches is peak during these months to accomplish these goals.

After June, the population starts to decline, they don’t draw much comb, and they don’t bring in huge amounts of honey. So don’t be caught in the trap of thinking “oh I still have 3-4 more months of warm

weather to get them ready” – you don’t. Because they slow down. It is much harder to catch the bees up than it is to properly prepare them at this critical time of the year. If they are set up well now, then the fall and winter are easy. Make them work for it in July, August and September, and the winter will be hard on them.

So, give them lots of room to pack in all these resources. Give them lots of boxes/supers. Nectar needs to be spread out and condensed into honey through dehydration. The bees need about two times as much space to spread out the nectar as they will to store the final product – honey. I have seen many hives get nectar/honey bound at this time of year because I did not add more than enough boxes. Don’t be afraid! Pile them on! They can always be removed later. Better too many than too few.

Populations are building rapidly and lots of nectar is being brought in, this means they fill the boxes rapidly. Sometimes, so rapidly that we are challenged to keep up! We pull excess frames of brood and honey/pollen to create splits now. This helps with reducing brood-nest congestion and thus swarming. Combine the pulled frames from several hives together into one split. They will have no problem accepting each other in the confusion. Let the split raise a new queen. Thus the parent hives feel like they have swarmed and no longer need to, and you have increased the size of your apiary. In May, I am in the middle of raising queens for nucs and increase. I will demonstrate some of these processes in my monthly field days.

Because populations are expanding rapidly and the hive starts to feel congested, swarming occurs. May is the peak time for swarm calls. Last year I got over 10 calls in one day! Get those bait hives out and placed to capture swarms! 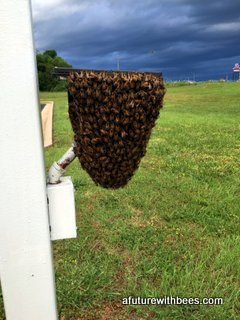 Everything is happening now, and the bees are in their mad rush to get 9 months of winter supplies stored in these next 3 months, so the beekeeper needs to check hives often. For these 3 months (Apr-May-Jun), I recommend weekly hive checks. After things start to slow down in late June/early July, then hive checks can be reduced to a biweekly basis. Once August arrives, I am down to monthly hive checks. But I have been left behind too many times by my bees and have learned to get there often at this time of year.

Now is also the time for comb manipulation. Get those old, dark combs to the outside of the box or remove the oldest ones completely. Replace them with foundation. We need newly drawn combs every year for good disease and contamination management. Now is the only time they will be drawing comb so we can’t wait until later. Plus, foundation helps relieve congestion and gives the younger bees the opportunity to fill their function – drawing comb. When they don’t have any-where to draw comb, i.e. no open spaces in the hive, it adds to the drive to swarm. When removing frames to makes splits, replace those pulled frames with foundation. Place the foundation right next to the brood frames – between the brood frames and the honey/pollen frames. This places it right in the “work zone” of the hive. The queen is asking for more places to lay and “pushing” the them to draw more comb. Foundation will be drawn amazingly quickly if placed next to the brood instead of higher up in the hive. Although some foundation does need to be placed in the honey zone above the brood nest as well.

Because this is the time of year when swarms are most prevalent, the removal calls start coming in as well. Removing a colony from a wall or floor joist requires at least two sets of expertise and tools. You need all the construction knowledge and tools, AND you need all the bee knowledge and special removal tools. It is not as easy as it sounds. If you are interested in attempting a removal, please let one of the experienced beekeepers show you the ropes. A lot of bees die from inexperienced people attempting this on their own.

If you are dealing with packages or nucs, treat them like babies (as I said last month). They are small and weak compared to overwintered hives and need to be protected. Keep the screened bot-tom closed – the so called “ventilation” hinders them, not helps them. Keep the entrance small until it gets hot - well into the 80 degree days. Don’t open the entrance fully until they have filled an en-tire deep or 2 mediums and are moving into the next box. Feed them! Give them feed (sugar/syrup) until either they quit taking it or until you start adding honey supers. Yes, they can survive without our help, but if you want them to thrive, give them the resources and the comfortable living space to do so. If they have to deal with drafty, hard to heat boxes; compete for food; and protect a large opening from other bees; they will have less energy to devote to growing a strong population and storing enough provisions to survive the long fall and winter ahead.